With the word “steels” we refer to all those steels that, thanks to their chemical and structural composition, can be subject of heat treatment in order to guarantee the required mechanical characteristics.
Heat treatments are operations that modify steels' structure through the temperature variations, which are well established in a precise period of time and have a controlled cooling to achieve the desired mechanical characteristics.
Treatment cycles are chosen on the basis of the following desired characteristics: hardness, impact strength, machinability.
In order to accomplish a correct heat treatment, it is fundamental to know the critical points or transformation points of each steel, which indicate the structural change depending on the temperature variation.
Steel's critical points depend mainly on chemical analysis and carbon content.
The most important ones are:

There are further critical points, which are less important though, so we won't write them on the list.
Heat treatments can be divided into preliminary and final ones.
Preliminary ones are useful to confer steel those characteristics that will improve following mechanical machining (cutting, machinability for machine tools, limitation of deformations at the next heat treatment).
Final ones are carried out on finished pieces in order to acquire the desired mechanical characteristics.

The most common preliminary heat treatments are:

The most common final heat treatments are:

In order to satisfy the desired mechanical characteristics, all special steels have to be submitted to heat treatments.

The tensile mechanical characteristics, the toughness and the strength of pieces of steels depend largely on the percentage of martensite obtained after hardening.

Hardenability is a feature of steel that allows to transform austenite in martensite in a decreasing way, from the piece's surface until the heart in function of the cooling speed during the hardening/quenching treatment.

Hardenability depends on the content of carbon and alloying elements, on the dimention of austenitic grain and on the parameters of heat treatment (temperature, time and shutdown tool).

Hardenability is a fundamental feature for the choice of steel, which will be destined to the construction of mechanical pieces whose mechanical characteristics shall be enhanced after the thermal treatment.

Steels' hardenability is evaluated through Jominy test (UNI 3250). With this test, through hardening treatment of a standardized test tube, a curve is obtained, which has a decreasing harden measured from the different distances from the cold extremity of the test tube itself.

All steels, in function of chemical analysis, are classified with the hardenability curve Jominy, which is indicated in the Uni tables.

ALL OUR STEELS HAVE RESTRICTED, CONTROLLED AND CERTIFIED HARDENABILITY.

In order to control grain coarsening, which would be an obstacle for carbon diffusion, a reduction of toughness and an increase of deformations during heat treatments, during the sharpening process of casting small quantities of elements such as aluminium, niobium etc. are added, which impede steel's austenitic grain coarsening.

The quality of steel is higher the finer is austenitic grain. The coarse of austenitic grain is verified with the Mc Quaid-Ehn method according to Uni 3245, which is universally recognized.

The most restrictive specifications consider grain coarse that goes from 5 to 8 or even finer.

ALL OUR STEELS ARE CONTROLLED GRAIN STEEL, CERTIFIED 6 OR EVEN FINER ACCORDING TO MC QUAID-EHN METHOD.

The more the steel is alloyed, the higher the resistance and the hardness in the ferrite phase it will be, so steels won't be very machinable.

Moreover, if hardness is excessively low, it can make machinability difficult due to the formation of long turnings.

In order to improve machinability, you can operate in various ways:

The most efficient elements are the following ones:

In order to further improve machinability, some steelworks, after years of research, have elaborated steels with improved machinability through the modification of sulphur, that goes from threadliketo globular, correcting calcium or tellurium during the elaboration of casting. This led to have steels with a machinability that is very close to lead steel, without its negative effects though.

WE HAVE A COMPLETE ASSORTMENT OF SOME QUALITIES OF CASE HARDENING STEELS AND HEAT-TREATABLE STEELS AT AN IMPROVED MACHINABILITY.

For technical in-depth analysis, please go to the section “download”, where you will find the steelwork's technical publications.

Steel that we commercialize comes exclusively from the best steelworks of the European Community.

Steel quality available at our storages. 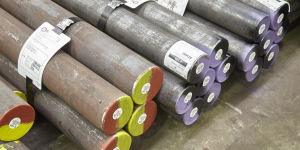 Our steel always comes from the same European steelworks, which guarantee a continuity for what concerns quality. The constant quality of the supplies allows to have repetitive parameters in mechanical processing and a greater control over deformations during heat treatment. 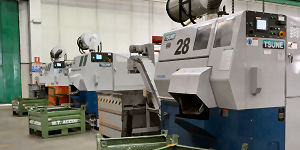 Precise cuttings of small and big series are guaranteed by the employement of latest generation automatic saws that were projected and realized in order to guarantee precision standards required by customers, reducing processing wastage. 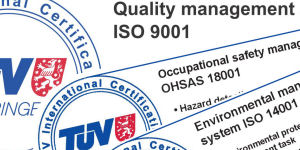 The certification and introduction of the Quality System management allowed M.T.Acciai to improve not only its efficiency, but also the quality that is offered, in order to better meet our customers’ needs.